The Sarawak Society for the Prevention of Cruelty to Animals (SSPCA) 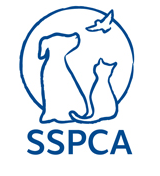 The SSPCA began its work in Kuching in 1959, formed by a small group of expatriate officers who were moved by the sight of the diseased dogs and sick animals that roamed the streets. It was legally registered under the Registrar of Societies as the “Kuching Society for the Prevention of Cruelty to Animals (KSPCA) on 11 September 1962.

In 1977, the Society changed its name to the Sarawak Society for the Prevention of Cruelty to Animals, or SSPCA. In the years that followed, dedicated volunteers and their very active cadre of Junior Members, organised awareness - raising events, rescued and re-homed stray animals, initiated a pilot neutering scheme, and organized fundraising events.

Perhaps their most notable achievement was securing tax-deductible status for the Society. This has proved an invaluable asset to the Society in its fundraising efforts.

In 1999, through the generosity of the Sarawak State Government, the SSPCA secured a 0.6-acre piece of land at 61/2 mile Penrissen Road, Kuching on which to build its animal shelter. In the years since, this little piece of land has served as a refuge, a haven for thousands of stray, abused and abandoned animals.

Some have been fortunate enough to be given a second chance at life, others have lived out their days in the loving care of our shelter staff, and many have gone on to the ‘Great Kennel in the Sky’. As our finances improved, we expanded and improved the Shelter facilities and services to cater for the ever-increasing number of animals brought to our door. Unfortunately, this meant having to make sacrifices and utilise the exercise/play areas.

At the moment SSPCA is taking care of mostly stray and abused animals. The shelter mainly depends on donations from the public to run its operations. It has six full time staff assisted by volunteers to care for 260 animals.

The society needs almost RM30,000 every month for the shelter upkeep and to provide medical care for the animals. Besides caring for the animals, SSPCA is also working at getting a new home for them. All the animals will be given proper care and treatment before being put on the adaption program.

The shelter is now getting overcrowded with the increasing number of animals there and the growing development surrounding the area. Hence, SSPCA is looking at building an integrated purpose-built Animal Village. The Animal Village is estimated to cost RM1.8 million to build and SSPCA hopes to raise as much from all its fund raising activities to achieve this dream.

For more info and to support the SSPCA’s initiatives click here
Frigged by Dave Avran at Tuesday, October 27, 2015 No comments:

Email ThisBlogThis!Share to TwitterShare to FacebookShare to Pinterest
Friggin Tags: The Sarawak Society for the Prevention of Cruelty to Animals (SSPCA) #AfA2015

The Asia for Animals (AFA) Coalition 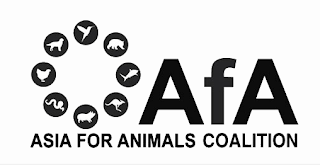 The Asia For Animals (AfA) Coalition is composed of 16 well-known and respected animal welfare organisations that share a focus on improving the welfare of animals in Asia. AfA is committed to providing support to organisations with their campaigns to tackle some of the most pressing animal welfare concerns in the region.

The AFA International Conference is the largest, most representative Asian animal welfare platform for animal welfare experts, NGOs, activists, members of the public, private corporations and governments to consolidate and share experiences, with an eye to developing new strategies and facilitating long-term change.

Since its establishment in 2001, this biennial conference has welcomed delegates from all across the world, and been held in Manila, Hong Kong, Chennai, Bali, Chengdu, thrice (2005, 2010 and 2013) in Singapore and this year in Kuching, Sarawak.

For more information on the issues covered by AfA please click here.
Frigged by Dave Avran at Tuesday, October 27, 2015 No comments:

An Introduction To Natural Sarawak

As kids, we grew up reading Grimm's Fairy Tales, where the hero (who is always a Prince) finds himself embroiled in an exciting adventure in an enchanted forest. Think Snow White, Hansel and Gretel, The Grateful Prince, Rumpelstiltskin and even Robin Hood. Think strange and unusual people, magical trees and speaking animals. 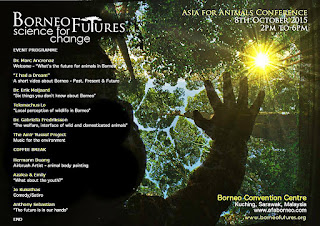 We will let the very eloquent and suave Anthony Sebastian of Borneo Futures tell you this fascinating “Once upon a time” story.