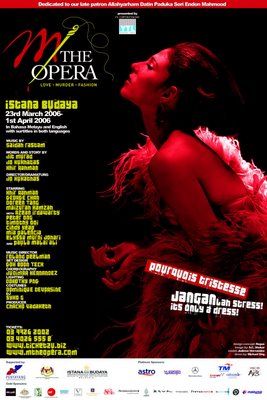 Extra Show on Tuesday March 28th
Read more here
SmoovePinch'ed: Yes, there's mixed reviews about this production good and bad.. and our verdict is, we liked it. Visually fresh, clever use of staging and props, superb fashion, witty script, some great singing although the talents available were slightly under utilised, very abstract, interesting fusion of traditional musical instruments and the orchestra and overall, seamless integration of music, talents, fashion, design, songs and art.. superb effort. Still a journey to go for it to be great but it's a step in a positive direction. Congrats to the whole team, it was a tough process but we appreciate the great effort. Why? Because you either get it or you don't. If you did, congrats. If you didn't, go see it again. If you haven't, go see it and judge for yourself. If you don't, then you can't really comment on it can you? ;)
Frigged by Joe Frigg at Tuesday, March 07, 2006 No comments: 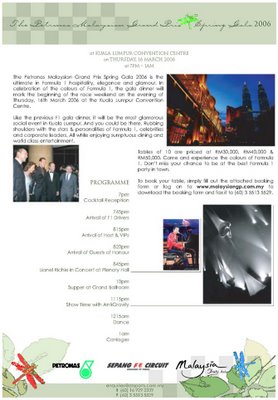 Click here for the Passport
Frigged by Joe Frigg at Saturday, March 04, 2006 No comments:

As Kuala Lumpur revs up for the PETRONAS Malaysian Grand Prix 2006, both Sepang International Circuit (SIC) and Kuala Lumpur City Hall have once again collaborated to provide racing fans and supporters with thrills and excitement galore. Expect the best of motor racing action, celebrations and a carnival-like atmosphere when you arrive in the Malaysian capital. The F1 related fun and entertainment activities during March are known as Pit Stops. Pit Stop 1 is the launch of the PETRONAS Malaysian Grand Prix and Kuala Lumpur Grand Prix City (KLGPC) programmes at Berjaya Times Square on 5 March 2006. Pit Stop 2 is the shopping spree in KLGPC from 11 to 26 March. The F1 fraternity and supporters can browse and buy the best bargains be it elegant designer brands or unique ethnic souvenirs at shopping malls throughout the city. For Pit Stop 3, the Naza group of companies is organising the KL F1 Auto Festival at Dataran Merdeka, Kuala Lumpur from 11 to 12 March 2006. Among the attractions are the KL 3rd International Vintage & Classic Car Concours parade, Maxis activities, scooter demonstration and competition, musical performances, F1 mini party, colouring contest, magic show, auto festival, karaoke and big screen show of the F1 opening race live from Bahrain.Pit Stop 4 is all glamour and prestige as SIC is holding a spectacular 2006 PETRONAS Malaysian Grand Prix Spring Gala at the Kuala Lumpur Convention Centre on 16 March. The highlight is the live concert by Lionel Ritchie, the multiple Grammy award-winning singing sensation from the U.S. A total of 200 tickets priced at RM900, RM1,300 and RM1,550 are available to the public. Ticketed guests will have the opportunity to mingle with Formula 1 drivers and personalities, celebrities and corporate leaders during the cocktail reception. Pit Stops 5 and 6 are BMW Sauber F1 events. The BMW Sauber team is a new addition to the 2006 Formula One World Championship. Their events from 16 to 19 March include a fashion show, entertainment act and BMW Heritage Race Cars Demo at Jalan Pinang and Jalan P. Ramlee on 18 March. Pit Stop 7 showcases the richness of Malaysian culture and lifestyle known as “Sights & Sounds of Kuala Lumpur Grand Prix City” at the downtown Bintang Walk from 17 to 18 March. Other pit stops are the Red Zone party at SIC on 17 March (Pit Stop 8), Renault F1 Tiesto Live in KL at SIC on 18 March (Pit Stop 9) and McLaren Chrome Party at the Mercedes Benz showroom, Jalan Sultan Ismail (Pit Stop 10). Sepang will host the second round of the 2006 Formula One World Championship from 17 to 19 March, a week after the new season opens in Bahrain on March 12. The races held at Sepang F1 Circuit, some 50km from the shopping and entertainment haven of Kuala Lumpur, is only a 10-minute drive from the Kuala Lumpur International Airport. Tickets for the PETRONAS Malaysian Grand Prix range from RM50 to RM1,750 and can be purchased at the SIC office in KL Sentral, via internet at www.malaysiangp.com.my or by calling Ticket Hotline at 603-87782222. Issued by: Communications Division, Tourism Malaysia
Frigged by Joe Frigg at Wednesday, March 01, 2006 No comments:

The Red Zone Tour set to take Malaysia by storm!!

The highly anticipated Red Zone Tour is back! Partygoers around the nation can now heave a sigh of relief as these much awaited parties, held annually in celebration of the hottest, most sizzling race in the world make a thrilling comeback. Organised proudly by Protein Events and Future Sound Asia, in conjunction with Sepang International Circuit (SIC), the Red Zone Tour 2006 is set to sizzle with a list of illustrious DJs that will excite the most jaded of clubbers. The Red Zone Tour 2006, indisputably the official Grand Prix party of the season, will consist of two mind-numbing outdoor parties that will bring the nation up to speed on the thrill and excitement of the PETRONAS Malaysian Grand Prix - turning Kuala Lumpur into THE Grand Prix city of the region. The Red Zone Grand Prix experience will be brought all the way to Penang on March 11, 2006, as DJ Mario Piu (ITA), DJ Brent Burns (RSA) and DJ Gabriel (accompanied by Tabla Maniam, both from Singapore) thrills partygoers in an unprecedented outdoor experience at Cocos – The Garage. They will be joined by 3 equally exciting local acts – DJ Joey G from Channel V, DJ Roxy and DJ Desire. The heat picks us a week later, on March 17, 2006 at the F1 Village in SIC as ATB (GER) makes his Malaysian debut, accompanied by DJ Montana (NED) and DJ Tall Paul (UK). They are joined by local DJ Bryan Burger, while DJ Brent Burns and DJ Gabriel stage a repeat performance from their show in Penang. Completing the equations of sights and sounds is 4YOUREYE, an Austrian VJ husband-and-wife duo that will provide the ideal visual accompaniment for both parties. Coming to Malaysia for the second time, 4YOUREYE will have full creative freedom, turning both parties into a sensational assault on the senses. Red Zone this year has taken unparalleled steps to make the tickets extremely accessible – the first 1,000 clubbers in Penang and the first 3,000 in Kuala Lumpur will party for free once registered on www.redzone.com.my beginning 27 February 2006. Alternatively, tickets can be purchased at the door for RM20, which includes one standard drink. The parties are open to partygoers 18 and above only, and all tickets collections and purchases are dependant on display of a valid photo ID. Never before has Red Zone given this many tickets away free of charge, or priced them as affordably. This lives up to their promise of being the official Grand Prix party, giving as many Malaysians as possible the opportunity to experience the fever of Red Zone – turning it into the most celebrated Grand Prix event of the season. For more information on the Red Zone Tour 2006, please call 03-2072 9443.

Frigged by Arvind Pasricha at Wednesday, March 01, 2006 No comments: