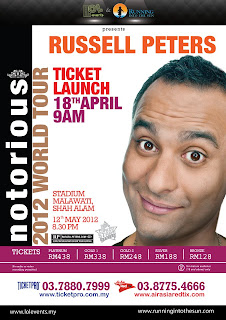 Updated
The barrel of laughs will continue for two days running now that world renowned stand-up comedian Russell Peters has announced a second show here in Malaysia at 8.30pm on May 11 at Stadium Melawati, a day before his originally confirmed show on May 12 at the same venue. The May 12 show saw 7,900 tickets sold out within three hours after they went on sale.

Peters has regularly set attendance records wherever he's travelled to share his brand of humour, which makes fun of racial, ethnic, class and cultural issues.

His greatest feat so far though, is selling out two shows in Dubai in eight minutes last month faster than pop diva Madonna's concert there.

Tickets for the May 11 show go on sale from 10am on Saturday and are available from redtix.airasia.com and ticketpro.com.my
Frigged by Dave Avran at Monday, April 30, 2012 No comments: 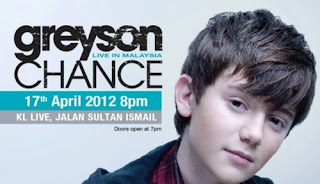 Hordes of screaming teens will be the order of the day as Greyson Chance makes a stop in KL on his first major Asian tour. The 14-year-old’s life has been a whirlwind since his Lady Gaga cover video went viral with over 44 million hits and counting. Catch him doing his magic right here in KL.

Filled with masterpieces top to bottom, this is the biggest jewellery event in Malaysia. This time around, the renowned Hong Kong International Jewellery Designer Association, an organisation known for its unique and exclusive jewellery, will be joining in the glitz and glamour.
Frigged by Dave Avran at Monday, April 09, 2012 No comments:

Footy fans are in for a treat as the masters of the game – think Robbie Fowler, Steve McManaman, Andy Cole and Ian Walker, as well as our very own Zainal Abidin Hassan – will set Stadium Malawati on fire in this epic match series. Fans will also have a chance to meet the players and get autographs at the Football Street Carnival. This will sell out in no time, so get those tickets now.
Frigged by Dave Avran at Monday, April 09, 2012 No comments:

The Wizard of Oz

The Wicked Witch of the West and her crew of winged monkeys are up to no good again! Only Dorothy can stop them. Follow her on the magical adventure into Oz. Watch all your favourite characters and songs recreated on stage in one of the most beloved fantasy stories of all time.
Frigged by Dave Avran at Monday, April 09, 2012 No comments:

Email ThisBlogThis!Share to TwitterShare to FacebookShare to Pinterest
Friggin Tags: The Wizard of Oz 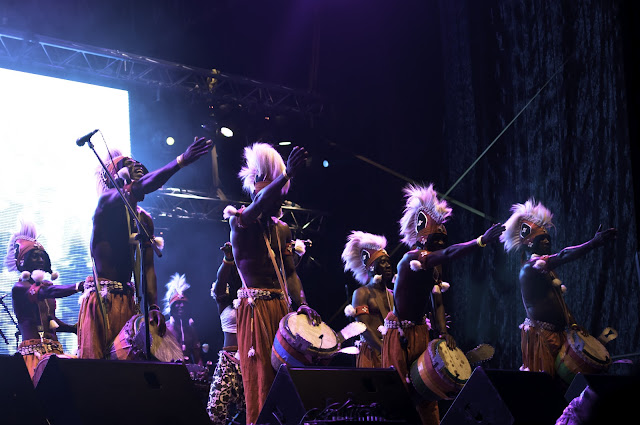