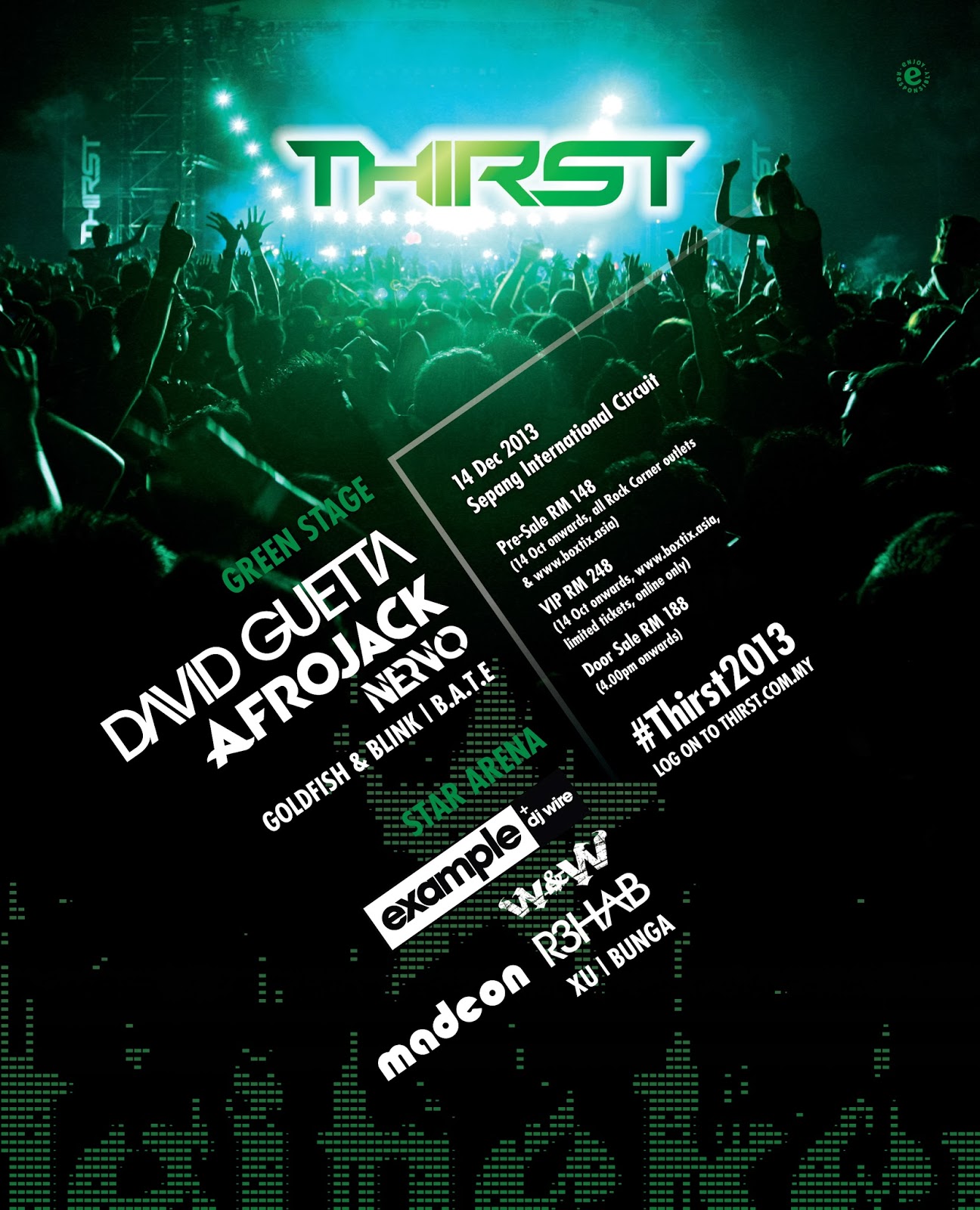 Watch the experiences unroll as Heineken Thirst returns on Saturday, 14 December at Sepang International Circuit with its most extensive and eclectic list of stars to date. Featuring two massive stages – Green Stage and Star Arena – of uncompromising and unconventional music experiences, the line up includes a thrilling mix of established names and emerging leftfield electronic artists from both the international and local music scenes.
From David Guetta to Afrojack, Madeon to Example, W&W to R3HAB and Nervo, Heineken Thirst is constantly pushing boundaries and adding new musical layers to Malaysia’s leading electronic dance music festival. EDM, electro, Dutch House, nu-disco, grime and more come together for an unforgettable night of music and personal experiences.
This year, Heineken Thirst turns the spotlight back onto the thousands of Heineken consumers who provide the energy and emotion that truly powers the festival. We have a series of highlights lined up, ranging from crowd activated engagements to intimate experiences designed to completely transform the night of a few lucky people.
“The music, the stars, the design and the innovation of Heineken Thirst are only part of the story of its success,” comments Jessie Chuah, Heineken Marketing Manager. “What truly differentiates Heineken Thirst is the people – music fans from all walks of life – who join us to bring their energy and open minds. Heineken creates the spark: it’s our fans who bring the night to life.”
One of the highlights of any Heineken Thirst is the custom-built festival site and the bars that really propel the festival into a class of its own. Once you walk through the doors of Heineken Thirst you walk into a world where everything – from the music to the site itself – reflects our commitment to creativity, excellence and progressive new music experiences across the twin spectacles of the Green Stage and the Star Arena.
Lighting up the Green Stage, Heineken Thirst headliner, Parisian socialite David Guetta needs little introduction. The world’s most sought after DJ and the man who brought the worlds of EDM, pop and R&B together, Guetta will demonstrate why he’s the world’s most sought after DJ and producer seamlessly jumping from mainstream pop accessibility to floor pumping bass-filled tunes.
Joining him at Heineken Thirst’s Green Stage is Holland’s Afrojack. The Dutch super-producer is currently riding on the crossover kick of this year’s singles, ‘As Your Friend’ (with Chris Brown) and ‘The Spark’. One of the leaders of the Dutch House scene, Afrojack has the enviable task of building the crowd to fever pitch for David Guetta.
Also up at the Green Stage is a group of fast emerging electronica stars. Award-winning former songwriters for hire, Australia’s Nervo add a shot of high fashion glamour to Heineken Thirst. As one of the hippest acts on the EDM circuit, the last two years have seen them playing shows everywhere from Tomorrowland to MTV’s VMA.
Closer to home, Heineken Thirst regulars Goldfish and Blink will demonstrate why they’re Malaysia’s first EDM superstars. Having recently inked a deal with Hardwell’s Revealed Recordings they’ve recently become regular features on the playlists of artists like Tiesto, Guetta, Nicky Romero and W&W. And it’s a Heineken Thirst debut for Brains and The Eye (B.A.T.E.), the hotly tipped duo who topped JUICE magazine’s Best New DJs of 2012 poll.
If Heineken Thirst’s Green Stage is the main event, the Star Arena is where you go to see the superstars of tomorrow as well as to experience some of the more eclectic tangents and talents that dance music produces. Headlining the Star Arena is W&W, the Dutch duo that is a confirmed favourite with Malaysia’s outdoor music fans. Mixing trance and EDM in equal measures, this dynamic pair is highly ranked by artists like Armin Van Buuren, Tiesto and Sander Van Doorn, as much for the crowd-pleasing potential of their tracks as for their own inspiring live sets.
Yet another Dutch artist on this impressive Heineken Thirst line up, Holland’s R3HAB has been identified as the next step in the evolution of the Dutch House genre pioneered by Heineken Thirst artists like Afrojack and Chuckie. He’s joined by UK EDM legend Example in a typically leftfield addition to Heineken Thirst’s Star Arena. One of the pioneers of the UK dance scene, whose sound has brought together the separate worlds of EDM, rave and grime, Example’s live show will bring a touch of UK street style to Heineken Thirst.
Adding to the ‘you saw it here first’ vibe of Heineken Thirst’s Star Arena is the Malaysian debut of French nu-disco pioneer Madeon. A 19- year old tech geek, Madeon has a reputation for thrilling live shows. His love of new technology allows him to constantly break new boundaries as he attempts to redefine the role of the DJ.
XU needs no introduction to fans of Heineken Thirst. Last year he rocked the Star Arena with his LapSap partner DJ Blink. This year he brings his own rough-edged take on electro and EDM to the stage, this time solo. Expect the unexpected! Also flying alone from his Twilight Actiongirl cohorts, BUNGA will open the Star Arena with an inspired take on the sundown set.
Following the success of his appearance at Heineken Thirst 2012 the world’s top dance music photographer Rukes makes a welcome return to the event to capture the excitement and inspired craziness of this year’s festival via his website www.rukes.com.
So get ready to get involved as Heineken Thirst unfolds over the next few weeks. We’ll be asking our music fans to participate in a range of activities designed to stamp their imprint and personality on Heineken Thirst this December. This personalisation, along with the experiences and moments we’ll be creating during the night itself is what separates Heineken Thirst from other music festivals. It’s a spirit of restless evolution and constant surprises that perfectly sums up the spirit of Heineken Thirst.

Stay tuned to Heineken's social media channels for the latest updates: for now, we can tell you that the line-up also includes an internationally known crowd pleaser, Dutch electronica outfit W&W. Rounding up the first reveal of this year’s Heineken Thirst lineup is Australian twin sisters and sometime David Guetta collaborators, NERVO.

Age Restriction: Heineken Thirst is open to those above the age of 18 years only

Get your hands on early bird tickets only on sale this weekend at Rock Corner, The Curve and come party together at #Thirst2013!

Tickets are available online at www.boxtix.asia from 14 October 2013 onwards

Tickets ONLY available online at www.boxtix.asia from 14 October 2013 onwards

For more information, head to www.thirst.com.my or follow the exciting action unfold on www.facebook.com/Heineken.
Frigged by Joe Frigg at Saturday, November 02, 2013 No comments: