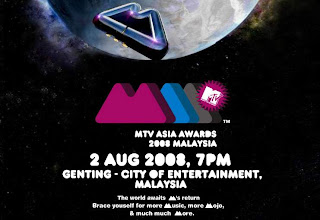 The 2008 MTV Asia Awards will be held at the Arena of Stars on 2 August 2008 and will be hosted by Jared Leto of 30 Seconds to Mars. The whole of will be buzzing as the show will be broadcasted to over 291 million homes across the region, and promoted on MTV Asia's website. Portions of the programming will be carried on MTV channels worldwide, reaching more than a billion viewers across 162 countries.

Be prepared to be knocked out by the spanking new refreshing format of the Awards. With live music at the centre stage, expect nothing but a whole night of exciting performances. The highlight is on pure music entertainment with five sets of live acts in the evening, each performing sets of two to four songs.

Visit the official website at www.mtvasiaawards.com for more information